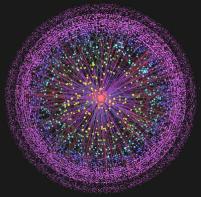 So many good conversations going on around the Internet. Here are some of them:

At Talking Philosophy blog, Jean Kazez writes about the Conservative Soul as it pertains to a British Parliament bill concerning the mixing of animal and human embryos in cloning. I must have a conservative soul, because this sounds abhorrent to me. Some say that new ideas are always abhorrent to people at first, until they get used to them. What I wonder is how far do we go? Where is the line where NOBODY crosses and where all are in agreement about what should never be done. Is there a line? If not, why not? Sometimes I think that the only difference between the liberal and the conservative mind is the notion of limits; who sets them and where are the boundries?

Over at the Washington Times, Julia Dunn brings up the problem of theodicy on her Belief Blog. Leaving aside this age-old question for a moment, one thing that has bothered me no end about the Steven Curtis Chapman tragedy is that news reports ALWAYS mention that his daughter was struck by an SUV. Now, this may mean nothing, but why is the type of vehicle always mentioned? No one ever says people are killed by a sub-compact car do they? Why is it any more of a tragedy to say she was run over by an SUV? Sometimes I think that environmental folks are putting the idea out there, that SUVs are evil, non-green, killing machines, so that this meme will be picked up in order to effectively kill the SUV sales industry.

I found here that there is absolutely no difference between sexist conservative assholes and sexist liberal assholes.

There’s an eye-opening and scary article at Junkfood Science by Sandy Szwarc about the BIG business of the weight loss/obesity shills/wellness industry. This industry has gotten very BLOATED and are promoting some frightening ideas; things that threaten the freedoms of everyone. Perhaps these social managers should go on a DIET themselves and curb their APPETITES for telling others what to do. For some reason, people have gotten it into their heads that they can control EVERYTHING; genetics, behavior, global climates, animal reproduction, you name it. Humankind HATES to admit that there are some things beyond their control and if you don’t agree….well watch out.