In my quest to find God, there have been numerous instances of my shifting sides, going from one 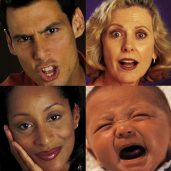 extreme to the other, questioning my allegiances. Most of them, however, have to do with religion and the institutional church than it does with the question of God’s existence. I think I’ve always assumed God existed, even from childhood. I don’t remember being taught to pray, but I did it a lot! I don’t remember ever learning a dogma of any kind, so I never thought of it. It’s almost as if I was led by God to come to the point where I could accept the love of Jesus. Emotion you say? Why of course it is. And that is precisely the argument David Brooks uses in his article “Neural Buddhists” to explain why atheism will never undermine belief in God. Belief in the bible will be challenged, but belief in God will go on. Studies of the brain show that humans are not the computers scientists think we are. Brooks believes that

If you survey the literature (and I’d recommend books by Newberg, Daniel J. Siegel, Michael S. Gazzaniga, Jonathan Haidt, Antonio Damasio and Marc D. Hauser if you want to get up to speed), you can see that certain beliefs will spread into the wider discussion.

First, the self is not a fixed entity but a dynamic process of relationships. Second, underneath the patina of different religions, people around the world have common moral intuitions. Third, people are equipped to experience the sacred, to have moments of elevated experience when they transcend boundaries and overflow with love. Fourth, God can best be conceived as the nature one experiences at those moments, the unknowable total of all there is.

In their arguments with Christopher Hitchens and Richard Dawkins, the faithful have been defending the existence of God. That was the easy debate. The real challenge is going to come from people who feel the existence of the sacred, but who think that particular religions are just cultural artifacts built on top of universal human traits. It’s going to come from scientists whose beliefs overlap a bit with Buddhism.

Brooks goes on to say that Buddhism is the only belief system that allows for transcendence without laws or revelation and that may be so. There are many good principles in Buddhism. But in reality, what adherents forget is that Buddhism is just another religion with rules and regulations like any other religion. Faithful Buddhists decry this religious aspect of their beliefs just as some Christians and Jews and Muslims denounce the institutional aspects of theirs. The only difference is that Buddhism does not posit a personal interactive God who cares about the world and everyone in it. Personally, I find it fascinating that the religions that claim God personally cares for us and interacts with humankind and carries out the wishes of the faithful are the same religions that espouse apocalypticism and have practiced ethnic cleansing in their own histories. Conversely, even though Buddhism has also been somewhat institutionalized, its emphasis on self-realization or self-transcendence has not led to such activity. So, it follows logically that the more personal one’s religious God is, the more that that God thinks and acts like petulant human beings. Perhaps Brooks is right in that the next evolutionary step to believing in the Divine is the de-personalization of one’s God.

I’m not sure people are ready to give up that idea.I’m not sure how Jews and Muslims deal with their own ideas of a personal God, but as a Christian is was extremely attractive to me to think that God deals personally with each of us through prayer and supplication (2 Kings 20:5); that God died personally in our stead, for our sins (Romans 5:6). While I am not a big fan of institutional Christianity, I do know that stripping Jesus Christ of his deity, disconnecting the man/prophet from his God, and stripping God of all semblance of personality will never “play in Peoria” as they say. I see it as a good thing that people are starting to wake up to the fact that Christianity, the religion, is just another big business that makes some pastors rich and defeats the purpose of the spirituality of loving one’s neighbor. Unlike some, however, I’m not ready to throw the baby out with the bathwater. I’ve met people made better by faith and I’ve met people who made themselves