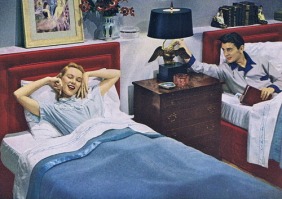 Sometimes we don’t know what’s good for us. We think we do, but we don’t. My husband thinks he knows what he wants. No, I take that back. He doesn’t know what he wants. He just founders around saying yes to everything until something clicks. He’s stuck in perpetual childhood. If I am missing a father, he is definitely missing a mother.

Passed off to a boarding school at an early age, my husband learned that pining to go home or be with his parents did no good. Reinforced no doubt by the teachers at the school, I imagine that the homesickness at age 5 was horrendous. They say that we cry to get attention and if attention doesn’t come, we make up our own things to comfort ourselves.  I think, without being a psychoanalyst, that he’s been trying to find a mother’s love, by feel, ever since.  In many ways this has made him unable to feel properly and in other ways it makes him want to make up for what he can’t be. You see, unlike other men I’ve met who were as self-absorbed, he doesn’t have it in him to NOT care and do things for me. He still will.  He’ll make me tea, or bring me water at bedtime.  He’s determined to feel useful and seem caring. However, I think he does mean it in his small way.

When we act as if all is normal and nothing is amiss, we are like any other married couple. We laugh over stupid jokes, talk about current events, see people who call or come over, fix dinner, watch television, work on things on the computer. I love him at those times. It’s when I come across clues of his ‘other’ life that I get upset and sleep elsewhere. But my doing this doesn’t seem to faze him at all.  All he has to do is ask me to sleep in the same bed, but he never does. It’s always me that gives in.

It’ll be four days until his cancer op. When I don’t sleep with him, and I do mean just sleep, he keeps irregular hours and is more tired than usual. I can tell recently that this is true. We haven’t slept together for about a month. Whether he admits it or not, sleeping together comforts him. I want him to be rested when he goes in on Thursday. It’s likely to be a long couple of days and we may find out things we don’t like. I need the comfort too and I’ll admit that.  But even after all this, I care enough about him to want him to be comfortable too.

So, I’ve changed the sheets on his bed, brought in my book and my evening pills and my glass of water and type this post. He is out playing at a gig, which was booked last year, and he won’t be home until late. It’s the first time I’ve ever heard him say that he wished it was over with and wasn’t looking forward to doing it.  Perhaps he’ll finally get some sleep.